Why do we have two ears?

Our two ears act as a type of receiving station for the brain. One ear is directed to the left, the other to the right. When the ears pick up a sound, the brain calculates the angle from which the sound has arrived. The brain has this capability since the closest ear receives the sound microseconds earlier than the other ear. With only one ear functioning properly, origin of sound is impossible to determine. Even more importantly, the quality of sound is better when it is heard with two ears. Speech received by only one ear sounds flat and devoid of its rich tones. (Phonak, Hearing Basics Brochure)

The Function of the Ear

The ear is made up of three different sections or parts: the outer ear, the middle ear and the inner ear. If there is damage to any of these sections of the ear it can result in hearing loss.

The outer ear collects sounds from the environment and funnels them through the auditory system. The outer ear is composed of three parts, the pinna (the external part of the ear that is on the side of the head), the external auditory canal (ear canal), and the tympanic membrane, also known as the eardrum.

The inner ear is responsible for interpreting and transmitting sound sensations and balance sensations to the brain. The inner ear is small (about the size of a pea) and complex in shape, where its series of winding interconnected chambers, has been compared to a labyrinth. The main components of the inner ear are the vestibule, the semicircular canals, and the cochlea. This is the portion that connects the ear to the brain through nerves. Hearing loss caused by a damaged inner ear is called sensorineural hearing loss (SNHL). A combination of these is known as a mixed hearing loss. 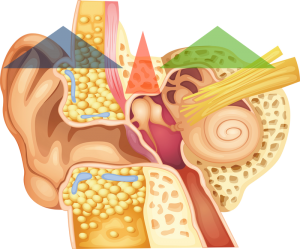 Please refer to the diagram for better understanding of the different parts of the ear.

In the outer ear typical problems include excessive accumulation of earwax (or cerumen) and infections to the auditory or ear canal.

In the middle ear the most common causes for hearing loss are perforation of the eardrum, infection or fluid in the middle ear and otosclerosis (a calcification around the stapes limiting its ability to move). Many outer and inner ear problems can be treated successfully with medication or surgery, but in some cases, when treatment is not effective, then using hearing instruments is helpful.

The majority of hearing problems result from damaged inner ear structures. Typical causes are the natural aging process, excessive exposure to noise, medication that is toxic to the auditory system and head injuries. This damage, unlike middle and outer ear damage, is irreversible but can be largely overcome with hearing instruments. (Phonak-Hearing Basics Brochure)

What does the degree of hearing impairment mean?